This article is about the playable race. For the NPC, see Frieza. For other uses, see Frieza (disambiguation).

The Frieza Race[3][4] is one of the seven races available to the player once they start the game.

The Frieza Race can change their skin color (only to shades of white) and their hair color (which changes the colored spot on their head). Their height, width, and hair style cannot be changed.

The currently unclassified race, unanimously referred to as the Frieza Race, appear as anthropomorphic figures, like all playable races. Notable features about the race include armor shells that are superficially part of their natural body,[5] their horned heads, and a tail.

Their transformations drastically change their features and Bio Suits, including their height and width. 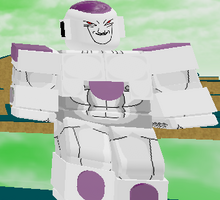